The Adventures of Snowpuss and Gidley 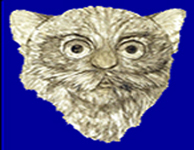 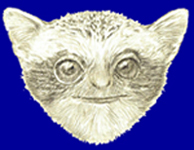 I came, I saw, I conquered and then Snowpuss and Gidley happened. It was right out of the twilight zone. I knew we had animals, wallabies and birds, a few echidnas, even saw a platypus once, but they weren’t pets, and didn't enter my world until that day. I was quite happy being an Argonaut and paddling about enjoying myself or wasting time, it really depends on who you listen to, me or Snowpuss.

It was a sunny, bright and totally awesome day, a proper kid’s day. The water shone, the fish were at the bottom, and no where near my fishing line and the clouds were enjoying a holiday, as I was enjoying the day. Then it happened the forest absolutely erupted and a light so bright, I squeezed my eyes shut and thought I was hallucinating –you know the word –well look it up – I saw strange things, weird, right out of nightmares. Two little cats –oops, he frowns if I call him a cat. Better to be safe and call him snowpuss –he’s a little person with fur, like an animal but he can speak, actually he has a better vocabulary than I do but I’m a kid and that’s different. He has a brother, no not a bother –well, the jury’s out on that one, no a brother, but they look different. You can tell that Gidley is different –looks incredibly smart and Snowpuss looks like everybody’s favourite Uncle. Has a white beard like Santa, and Gidley has Zorro’s mask.

Popular posts from this blog

December 22, 2018
A talk this morning with my dog ‘Puddles’ while I performed a shampoo and bubble bath for ‘her Highness’, followed by a warm drying with a hairdryer. “Now don’t move while I do your tale, no not that way, over here.” We proceeded to do her perennial overcoat shortened of course for our summer. It may have lost length but the vibrancy of the fur denotes her level of health, it is shiny, fulsome, and robust. Enough so that the dryer is flat out coping with her water drenched coat required of course to ensure anything underneath is clean. She sashayed around picking the parts she wanted to be dried instead of relying on me, being a Shih Tzu/Maltese cross, she is somewhat bossy or selective of her body, you choose. This, of course, interfered with the area I had allowed for this task, so I spent most of the time soaking up the water on my clothes as she tried to push me back for her escape. For nine years I have washed her each week, but each time her actions are the same. The next da
Post a Comment
Read more

A conversation between Hardin the freebooter and Commander Remkin of the Windforce.

November 05, 2015
As the necromancer cleared the rim of the moon he had an inkling of something and he looked to his droid, which was transfixed by the screen. ‘Sir,’ it said as an enormous ship filled the sky. Hardin jumped to the firing platform as his droid grew silent. Firing solutions were aligned as the cup of tea dropped to the floor and Hardens life swept before him, ‘my ship won’t last long against this’ – ‘Stay your hand Hardin Williams, your droid has been frozen as well your guns,  you will now come aboard the Windforce’.   ‘But, but the cruiser’ –‘that is now with its Gods, now you will come’. As Hardin stood transfixed by the sight of the Windforce his body was surrounded by a shimmer, as the air around him became transparent, his droid was released to monitor the ship. In seconds he became aware of a platform and armed guards surrounded by plas-glass and he was ushered down a corridor he thought somewhere within this ‘ship’, he thought it was but it was enormous, spherical, l
Post a Comment
Read more

July 25, 2018
"The falsity of life –all the ambitions then the reality as life unfolds in ways never dreamed of, the pitfalls, the mistakes, the consequences. The one factor that sustains us as we grow older, the memories, ah those memories of past where we consider every factor, over and over and the tears –the triumphs – the trials that bring maturity and wisdom - only after the fact –why is that?" The fire grows cooler it needs fuel, the chill increases and the arms beat the body acutely aware that warmth is receding. The sky is clearing but smoky residue fleets across the air as if clouds are forming, but that is not the case, something else caused it. Forest sentinels stand amid the bracken and grasses of the forest floor high on an escarpment carved from a prehistoric shifting of the earth's tectonic plates. Loose scree shifts among the rocks spread across the ground and a fire surrounded by more massive stones form a fire break where smoke rises signalling that more fuel i
Post a Comment
Read more