Another Life - Another Time

April 05, 2015
Off to starboard, the blinks of small cats eyes were stars an unfathomable number of light years away. As the distance closed, they grew in size or intensity. It wasn’t black out there not as black is meant to be. It’s a beautiful empty expanse with baubles called planets sometimes surrounded by smaller bodies, significantly called moons. I have seen deserts with more panorama than the space outside the viewport. However, deserts end at civilisation, space never ends, and for a human out in this limitless vacuum, it is hard to describe. Space is clear of smog, heat and perspiration; because it is numbingly cold and will boil your eyes in a heartbeat. The habitable planets owe their atmosphere and ability to hold life to the plasma/hydrogen/quron star in this quadrant. Now the Nemon has it off the port side behind the gas giant we are currently orbiting. 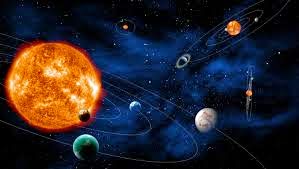 The Illurian adjusted his eye protectors as the plas-glass portal opaqued to see-through status. The Consortium of three who currently dominated Illuria appointed Leylink to assist specified trading partners in obtaining certain minerals. The Nemon was a gesture of Illuria’s need for other – more specific requirements, and Leylink was to cement that partnership. At 2 meters, the Illurian would touch the scales at 100k, as their bone structure wasn’t as dense as on a high gravity planet. The white mane of hair fell from a prominent, narrow skull more elongated than Earthers and the facial structure – eyes/nose and mouth were closer to leonine in perception. The narrow neck joined at the shoulders which being extremely wide, reinforced the skeletal build. The arms were longer with tapering fingers. Overall, the effect was human-like. An Illurian in National dress was not unlike the regal and majestic Maasai people of Earth.

The infinity of space still held him in thrall, even now, as he wondered how deep and how far the racing gas clouds had come. Ahead, a single planet blocked the flickering light from the distant stars and brought him back to the current task. He was standing on the bridge of the cruiser – The Nemon. It escorted the bulky Starmine as the manoeuvring jets bumped it out of low orbit around the latest find; a moon sized asteroid rich in metals - a rare find in this fragment of space. Starmine entered the asteroids ionosphere and without breaking trajectory downslided into the orbs gravity ring.

Squalls of icy winds ripped at the gas clouds as they fled across the tundra. The high wind chill froze any unprotected skin or machinery not wrapped in plas-steel. The vacuum of space provided an eerie silhouette to the ship falling in from orbit. The spherical silver craft moved into the foreground against the star field as it sliced through the pulsing wall of energy. The configuration of the bulbous vehicle and the broken terrain merged for an instant.The sleek plas-steel craft wavered, condensation wafted about its body. The tundra was consistent, it was a blasted wasteland marked by meteor strikes. 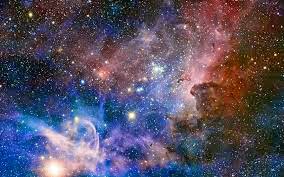 From the middle nacelle of the engine housing a rod extended with owl-eye sockets; as the rod extended, the owl-eyes opened, and a light too bright for unshielded eyes, bored into the tundra below. Molten cinders and steam exploded as the white hot lance speared into the ground. Starmine settled further following the beam as the lance bored deeper then shut down. Worker-robot craft separated from the mother ship and white-hot lights swept back and forth, as they joined in the assault; the grinding of mesh gears and searing heat swept the area. The mother-ship sank to the surface as if exhausted after the long flight.

Plas-mesh supports sprang from the sides of the vehicle on thickened rods stabilising the craft as it settled onto the undulating surface. Then the reason for the large bulge in front of the Starminer became apparent. The bulge opened splitting at the middle and large wheeled vehicles roared down ramps onto the tundra. Massed troops with weapons formed ranks and marched to the vehicles, while even stranger craft hovered overhead. As the last of the mining machines ran onto the escarpment, the landing ramp closed, allowing the behemoth to return to an elliptical orbit.

The ancillary thrusters decreased speed and the asteroid hunter turned as if bearing into a lee wind, impossible in airless space. It continued its gyration until it was forward of the primary goal; a signal was then sent to the Nemon.

With its forward momentum arrested Starmine sailed into position alongside a structure forming in airless space. An opening appeared in the side of Starmine opposite the elongated skeleton and several more respirator clad figures appeared. Moving out from the ship, other metal objects appeared and smaller tug ships towed the components into parking stasis. The activity moved across the abyss as a telescoped section of metal appeared through the doors. Unending, the movement continued. Figures swarmed over it until a pattern emerged.

Smaller carrier craft came into view and thrusters burned, turning the area into a sea of stars. Curtains of bright lights erupted from the belly of the behemoth as more objects appeared and wrestled into position by the tugs, which then swarmed over the ballooning structure.

A huge knitting needle of plas-steel passed through the centre emerging from the other side. Carrier craft swarmed about to a plan. The tugs moved about this silver globe attaching hawser lines. In concert, they moved and the globe moved. Quickly thrusters engaged and in a concentrated manoeuvre, the globe entered the atmosphere of the mass that only hours ago had been a rogue asteroid. 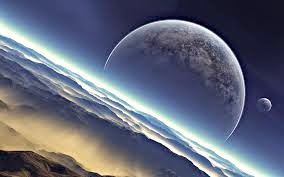 ‘As soon as the Reclamator reaches the surface have those supports plugged and we could start drilling within one day.’ The figure spoke from the bridge of the Nemon, as he surveyed the orbiting steel balloon that was slowly moving to the surface of the asteroid. The tall stick-like Illurian watched as the ships thrusters jockeyed the craft around the orb as the Earther joined him at the command observation portal. ‘Where did you find this one?’ said the rich throaty voice.


‘Out by the nebula on the edge of the cleared zone; there may be another in the area shortly.

Popular posts from this blog

December 22, 2018
A talk this morning with my dog ‘Puddles’ while I performed a shampoo and bubble bath for ‘her Highness’, followed by a warm drying with a hairdryer. “Now don’t move while I do your tale, no not that way, over here.” We proceeded to do her perennial overcoat shortened of course for our summer. It may have lost length but the vibrancy of the fur denotes her level of health, it is shiny, fulsome, and robust. Enough so that the dryer is flat out coping with her water drenched coat required of course to ensure anything underneath is clean. She sashayed around picking the parts she wanted to be dried instead of relying on me, being a Shih Tzu/Maltese cross, she is somewhat bossy or selective of her body, you choose. This, of course, interfered with the area I had allowed for this task, so I spent most of the time soaking up the water on my clothes as she tried to push me back for her escape. For nine years I have washed her each week, but each time her actions are the same. The next da
Post a Comment
Read more

One way to wake up!

June 04, 2015
On a cold winters morning I was – of course off world, where I spend most of my waking hours –much to the chagrin of anybody trying to get any sense out of me. I wandered through the remains of an ancient civilisation looking for clues to the current conflagration now raging in this quadrant of the galaxy.  My boots were scuffing the crap lying about until a glimmer of something interesting caught my eye and as I bent down a ruddy great mouth fastened onto  my wrist and commenced trying to remove it in one bite. My mouth went into a rictus as my other hand came up to rip the offending beast from my hand when I suddenly came upright in bed with tiger wrapped around my hand and giving me the best view of a wild cat. As I sat on the side of the bed I managed to remove him by pushing him off (never in my presence harm an animal –for any reason) and as he turned around he meowed just as the kitten he is although he is a rather large cat for his age. Trying to stem th
Post a Comment
Read more
June 04, 2015
Have you ever thought of where luck comes from; a big bucket, a particular ray of light, or that strange cloud that seems to be hovering and moves as we move . Some days can be triumphs or disasters. The people who look inside our heads tell us it is the power of suggestion. Sometimes you wonder as you tempt lady luck. Every day someone scratches a winning ticket, but I have never met one. Do you suppose they are taken away after they have screamed their heads off, and put into some kind of restraint? Or are they just trotted out each day so that ordinary mortals may feel the urge to try. I have stood in awe and watched sane men and women scratch their way through the ticket, the surface of the table and eventually the table. As if the glittering prize had slipped under several layers of plywood. The poor unfortunates gnash their teeth, frown at the clear sky, mumble something unintelligible as they shamble away knowing that the grocery money has been seriously depleted. O
Post a Comment
Read more